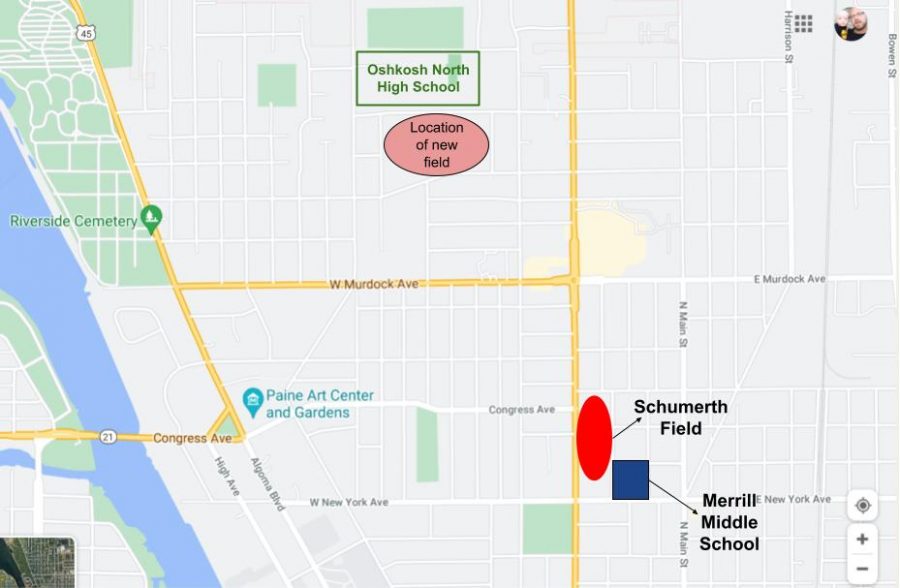 Oshkosh North will build a new turf field across Smith Avenue that will be used by several sports from both public high schools in Oshkosh.

The current field across from Merrill Middle School–Schumerth Field–that was used by high school soccer teams will be replaced as part of the 2020 referendum to build a new middle school. The new field will serve youth football, freshmen football, JV football,  JV soccer, and varsity soccer.

To cover the costs of the new field, the money comes from district buildings and grounds funds as well as donations, not the referendum though. The project will include modern lights and updated bleachers.

As of now, the field lacks a clear picture.

“The Oshkosh School District has engaged with an athletic architectural firm to design a synthetic turf field to be built at North High School”, said Director of Building and Grounds of The Oshkosh Area School District, Jim Fochs.

Many logistics of the field are still unknown, including when it will be ready for use, cost, and where the field will be constructed.

“We are currently working with the City of Oshkosh for permitting as well as the architect to complete the design. The exact location of the field and the timeline for completion are unknown at this time”, said Fochs.

In the next several months, Fochs and the district will present the plans to the City of Oshkosh, ending with a permit for construction. Then, they will open the project up for bidding with the goal of selecting a bidder by the end of summer.

Fochs is hoping for a completion date around November 2021 to ensure it will be ready for next year’s spring sports season.

Oshkosh North Athletic Director Craig Leider explained the uncertainty of where the field will ultimately be built.

“Right now we are trying to figure out the best place to put it. The two options are where the football field is now inside of the track, and the second option being just to the east of the track where we would run the field north and south.”

In addition, the costs will vary: the field is built inside the existing track, they can use existing fencing and electrical wiring.

Many people involved with North athletics are excited to finally have a turf field of their own after many years without one. Girls Soccer Coach Nicole Palmquist believes that playing at North as opposed to at Titan Stadium will be a better overall experience for her team.

“Hopefully we will have less rain cancellations and more time outside with the new turf. We also sometimes struggle with getting girls to Titan Stadium on game days. It’ll be easier playing at North, and hopefully it’ll help draw in more fans,” said Palmquist.

Oshkosh North Track Coach Michelle Carbiener is hoping for the new addition to compare to many other high school facilities nearby.

“It would be a great resource for our sports teams and ultimately bring us up in line compared to other schools in our conference. It will also help us out for when the weather isn’t too great; it’ll allow us to avoid rescheduling and postponing events.”

While many of the details have yet to be figured out, the new field is definitely happening. Stay tuned for more announcements toward the end of summer.