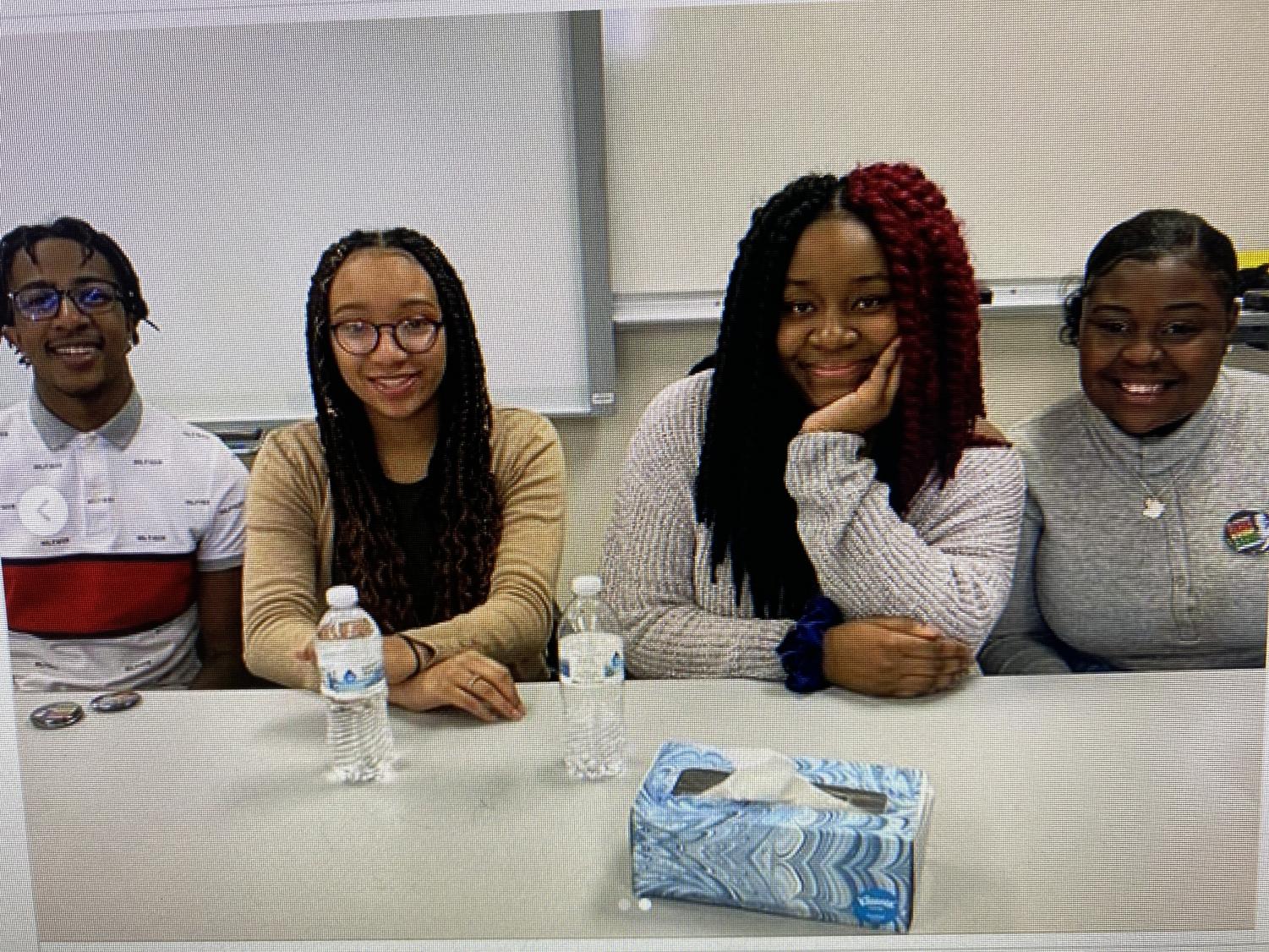 Following a national trend around the country at universities and high schools alike, a Black Student Union (BSU) formed at Oshkosh North in the fall, giving a voice to the black students who often feel like they do not get heard.

Led by President Alacia “Yoshi” Pettis, BSU at North started simply as a talk among African American students about their common experience growing up and going to school in Oshkosh.

Junior member Ashanti Merline said, “We felt that our school needed a place for [black students] to talk besides the hallways.”

After contacting diversity coordinator Logan Farrar about advising the club, the organizers quickly received over 50 signatures of eager students who wanted to begin this organization.

The club would have started last year if they had someone like Farrar to lean on.

“We wanted to start BSU last year but we didn’t have a clear leader or teacher to help start it,” said member Merline. “We felt that our school needed a place for [black students] to talk besides the hallways.”

As a policy, any student may start a club if they follow the proper protocol. Any club or organization can form at North if there is student interest, a willing advisor, and procedures are followed.

“When the interest was brought forward I was more than willing to support the BSU.  Anytime we can create a place for students to feel heard and more comfortable, we will,” Kiffmeyer said.

The BSU’s itinerary ranges from promoting cultural awareness to changing school rules to changing the structure of classes. Many members hope that the club can address interactions and diversity within Oshkosh North.

“We want to bridge the communication divide between black students and staff,” said Vice President junior Ajani Phillips a junior. “Teachers have said they don’t know how to handle the N-word when spoken in a black group, meaning whether it’s friendly or not.”

Coincidentally, Oshkosh North and Principal Kiffmeyer have already taken steps to address the cultural diversity and needs at school.

“As a staff we are continuing our understanding of Equity and how schools around the country, including Oshkosh North, can work to close achievement gaps.  This starts with understanding the history of marginalization in schools and moving to looking at schools through an asset-based thinking model versus a deficit-based thinking model.  Our journey for this difficult work has just begun, but I am confident that North staff will embrace the work together like we always do,” Kiffmeyer said.

The club has met several times during Excel the past two months, and their agenda continues to grow. Pettis wants to educate not only people in the club, but others on the topic of race and culture.

Pettis hopes this organization can change cultural ignorance in school because of the various cultures moving to Oshkosh from cities across the country, even the world.

Recently, Pettis and the BSU have already started to cause change: they presented a new policy to administration to allow headwraps and durags. The BSU argues that those forms of headwear stem from culturally specific reasons, namely the nature of black students’ hair. Their hair requires delicate care and costly oils to protect it from harsh weather conditions (especially in winter), and the headwear protects it from those. As such, it does not represent a choice but rather a necessary precaution.

While a rule change would apply to all students, the policy has not officially changed, meaning no headwraps or durags yet.

Principal Kiffmeyer said, “Once the change is made to allow headwraps and durags, yes anyone can wear them.  The change has not officially been made, so please stay tuned for announcements on this change.”

“Our issues mainly stem from how staff treat different students. We want rules applied evenly without feeling singled out. It seems like some students get a lot more leeway with rules whereas black students get sent to the office almost immediately,” Phillips said.

Members acknowledged many staff members do a great job making them feel comfortable, but a few experiences led them to believe more cultural awareness must happen. As such, they expect to see some backlash or rejection of their ideas at first.

“Even though these topics are uncomfortable for some, I want to bring them to attention to prevent a culture shock from occurring in our community.” Pettis said.

The shock comes as no surprise. Look around at Oshkosh North’s staff, and you can count the diversity on one hand.

Phillips said, “The staff here has almost no diversity. It’s hard to find someone we can trust to know our stories and some of the stuff POC’s [People of Color]  in general deal with.”

Hiring a more diverse staff, however, has many challenges. Often, a candidate pool will not contain options for diversity, and administration always wants to ensure the best candidate gets hired.

“Hiring is always a difficult task because I am always aiming to hire the candidate who will be the most qualified candidate, but also the candidate that will be the best fit for North.  You always want to have staff be representative of your student population. With that being said, OASD is trying new ways to advertise our openings. For example, they are posting our positions in a national database instead of just a local database. North is also hoping to recruit diverse staff through posting early for any open positions,” Kiffmeyer said.

At least 40 members have attended the meetings regularly, but anyone is welcome at any time.

Topics depend on the agenda but also depend on topics people bring up. The goal is to share questions and experience so that students can understand each other better and feel more comfortable with each other.

With the large and ever-growing diversity at North, a club like the BSU should have started years ago.

“I can’t imagine Oshkosh North without a BSU. It’s something we need. Lots of kids are failing and they don’t always get the support at home. We want to help support the students,” said senior member Endiyah Simpson.

Although starting a BSU may seem like a small step, Pettis believes it is an extremely significant moment for changing cultural appreciation.

Anyone is welcome to join.