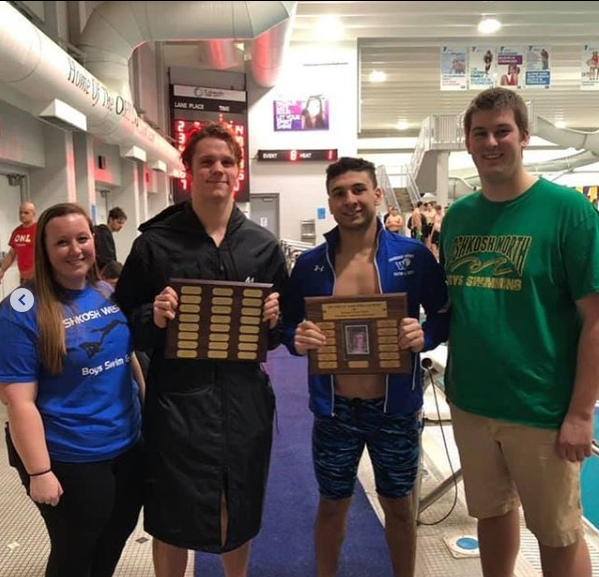 With two months of boys’ swim behind us, it’s time to check in and see how the Oshkosh North-Lourdes (ONL) swim team has done so far.

In dual meets, ONL has done exceptionally well, with a 6-2 record in dual meets. They were able to beat Oshkosh West 94-85, the first time ONL has won since 2001.

Seniors Andrew McAvoy and Kardo Ali received the Adam Gundlach Award that night, which is given to seniors on each team that represent dedication both in the pool and in the community. Gundlach was a junior swimmer for Oshkosh West in 2004 when he tragically lost his life in a water skiing incident.

McAvoy and Ali have also done well at invitational meets, placing 4th out of 8 at the Oshkosh West Invitational and 8th out of 11 at the Ashwaubenon invite.

The greatest impact on the team this year has been the addition of Lourdes Freshman Owen Konop. Konop holds the fastest 50 and 100 freestyle times for the team and leads the team in varsity scoring.

“Owen has been a huge addition to our team,” says Head Coach Jacob Landgraf. “He is a well rounded swimmer so we are able to use him in just about any event which is really helpful when it comes to making lineups for the meet. His times are incredible which help him place in bigger meets. Along with that, he is a great addition to our relays where he normally serves as our anchor to be able to pass his competition. On top of his great swimming he also fits into our team really well and helps bring the fun-working attitude that we have.”

The addition of four new seniors has also helped the team tremendously — Scott Swanlund, Lukas Kleveland, Spencer Tierney, and Brendan Krumrei have all stepped up and delivered when they were needed. Their contributions haven’t gone unnoticed.

“For it being their first time competitively swimming they are doing amazing,” Landgraf said. “They have all tried the typical events of the 50 free and 100 free and each of them has also tried a different event. Having them on the team has brought quite a bit of depth which helps to fill out a lineup especially since they perform well in any of the events I put them in. ”

Returning senior Bristol Boelter has also contributed to the team in new ways, boasting top 5 50 and 100 free times while also expanding his contributions to backstroke and even diving.

“I kind of wanted to challenge myself when I started doing new strokes,” says Boelter. “We were lacking a second or third person in a couple different strokes, and I wanted to help the team out. Diving was totally new to me, but I’ve always wanted to try it out.”

Looking forward, ONL has the two most important meets of the year coming up. This Saturday is the conference meet in Fond du Lac, and sectionals will be held in Neenah on Feb. 15. Sectionals will determine if anyone from ONL will make it to state.