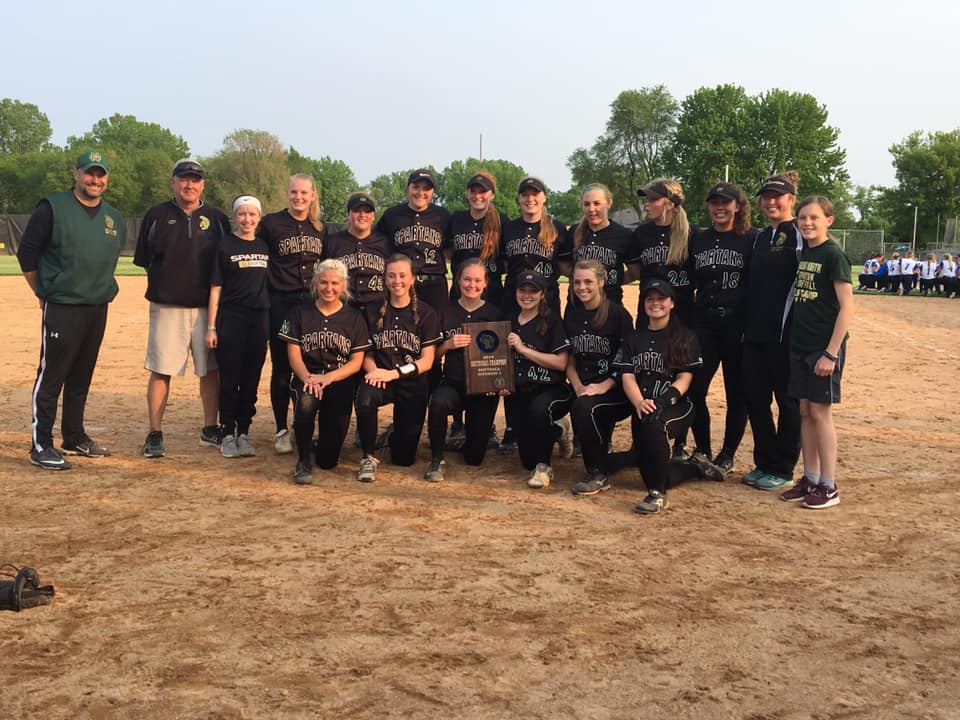 After defeating Oshkosh West 5-3 on Thursday, May 30, the Spartan softball team received the Sectional championship plaque.

Buoyancy is a great way to describe the Oshkosh North Softball team this year, rising above other teams throughout the area on their way to three State tournament runs.

The team has had an incredible season, capping off the regular season at 22-0, with over 8 girls batting over the .300 mark.

The Spartans have shown their ability to rise above opponents on many occasions by dominating teams and creating 10 to fifteen run deficits.

More than eight of their 22 regular season wins have been in less than seven innings, resulting in the ten run rule to end the games. Their most dominant performance occurred against Appleton West, where the Spartans put up an astonishing 22 runs in five innings. They also beat Appleton East 17-0 in five innings early in the season.

The tight bond between teammates and the immense talent the team possesses throughout the whole roster is the true recipe for their success.

“I think being such a close knit group, we have a lot of great chemistry. We are all in it for each other,” said senior third baseman Libby Neveau.

The Spartans have tallied up an astonishing 44 home runs, 338 hits and a team batting average of .401 as the Spartans head into the State tournament. Four girls were also nominated to be the Wisconsin State Softball Player of The Year this spring, including senior Libby Neveau, sophomore Brooke Ellestad, junior Sophie Averkamp and senior Sydney Supple.

The success, however, has not led to intra-team competition.

“We are all very supportive of each other, and I think we don’t really care who won the award and we are all there for the experience. None of us could’ve gotten that nomination without our teammates anyway,” said Ellestad.

The girls that have been at the varsity level for multiple years are more ambitious than ever, having fallen short of the gold ball the past few seasons. After losing to Kaukauna two seasons ago in the state semifinal game and a regional final exit to Fond Du Lac last season, this is a season of redemption for the team.

“For the seniors on our team, it’s really our last chance to get the gold ball and finish what we couldn’t in years past. That’s all that we really want in the end, it’s our last shot, and we all want it equally as much,” said senior second basemen Courtney Day.

They also understand that the time they have together is limited and the importance of the bonds they formed this past season.

“We know our end goal and that pushes us harder every day. We also know that our time with each other is limited, and winning games allows us to be together longer,” said Supple, the starting pitcher who committed to Northwestern University in 8th grade.

The return to state coincides with four players returning this season that were not on the team last season, two of in which were a part of the state tournament team two seasons ago.

“The people I play with is what makes softball my favorite sport, and when there was an opportunity to return, I took it because I knew it was going to be my last chance to play with them again” , said junior center fielder Emma Leib.

Heading into the state tournament, the Spartans have soared past every team coming in as the #1 ranked team in Wisconsin. The team previously beat West bend West 12-0 in the regional final game, followed by victories over Fond Du Lac in the sectional(4-0) and Oshkosh West in the sectional final(5-3).

Their final journey to the gold ball takes place with their first matchup at state being #8 ranked Nicolet, Thursday morning at 10AM. If they advance, North would play at 7PM Friday and the championship game would take place Saturday at 6:30PM.