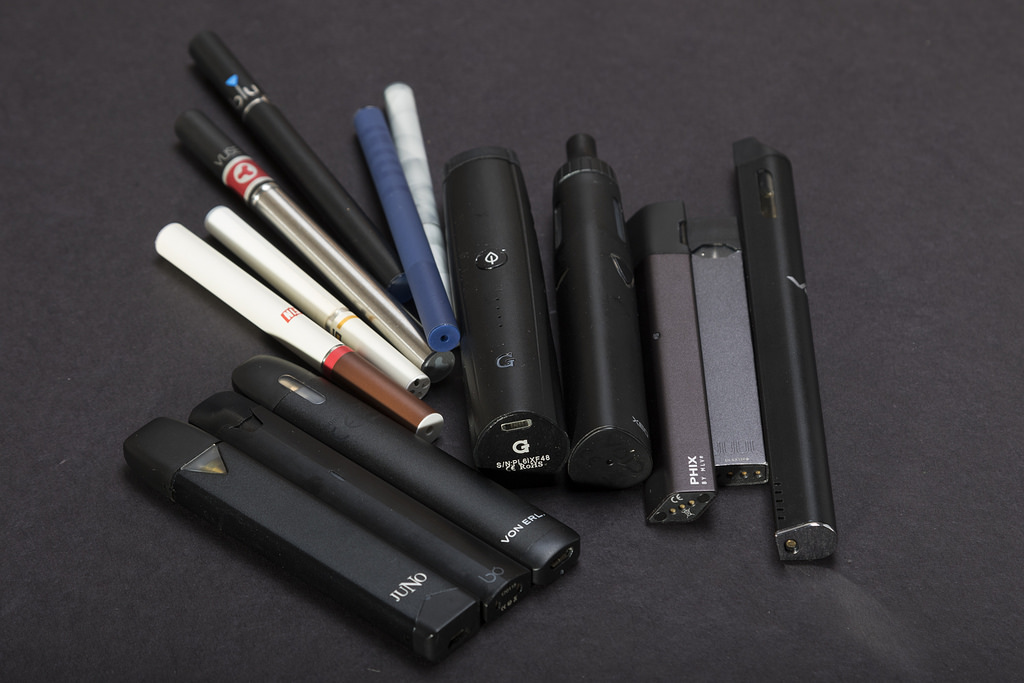 Vaping in the classroom

While smoking at school has always been a problem back to when the song “smoking in the boys room” came out, it usually happened in hiding. Now, though, the vape and Juul systems allow students to break the rules even more openly, sometimes in the middle of class.

A juul is a device used to inhale nicotine-infused juice. It comes in a small size and looks like a USB flash drive.

“But not the type [of joule] you learn about in chemistry”, Chemistry teacher Michelle Klysen joked.

According to Merriam Webster, vaping is inhaling vapor through the mouth from a usually battery-operated electronic device that heats up and vaporizes a liquid or solid. Most of the liquids that fill the pods in these devices contain nicotine, some equivalent to a pack of cigarettes.

This hobby appeals more to teenagers than adults because the juice comes in many flavors and does not often even taste like cigarettes, and therefore they are more knowledgeable about how to obtain and sneakily use these products.

“I’ve seen people hit their Juul when the teacher walked out of the room,” said junior Reis Hitz.

“I’d say someone vapes in every class, every day,” Deng said.

Students get away with vaping in a class with a variety of strategies. They might blow it into their shirt to hide the smoke, or they may “zero it out,” which means they inhale more air after they take a drag to “zero out” the smoke. This results in a much smaller, harder-to-see vapor.

The classroom is a much riskier environment to try and vape, so most students go somewhere else, such as the bathroom.

“People even joke about going to the bathroom in the Juul room,” said junior Max Gilles.

The teachers at Oshkosh North are less aware of this activity than the students.

“I have not seen anybody vape in class,” said Klysen.

While some haven’t seen it, they don’t doubt it hasn’t happened.

As the popularity grows, administrators are hoping for all staff to become more familiar with the tricks.

“Students hide the fact by blowing the vape into their clothing, out a doorway, or using their hands to dissipate the vape quickly before the teacher sees it. As staff becomes more aware of the odor and what to look for, this will hopefully curb the behavior,” says Dean of Students Leeann Gauthier.

Vaping in school comes with more consequences than just being reprimanded or referred by a teacher. School punishments consist of referrals, in-school suspension (ISS), out-of-school suspension (OSS), and confiscation of the devices.

“72 referrals have been written this year for vaping on school grounds or possession of paraphernalia that is associated with vaping such as e-cigs, mods, juuls, boulders, juice, chargers, cartridges, etc.. Well over 20 Juuls /mods/cartridges have been found by staff and turned into student services this year that were found left behind in a classroom or in the hallway,” explained Gauthier.

Consequences can go beyond the school and head towards the police department.

“There is a citation for underage possession of nicotine according to statuary 254.92(2) which states it is illegal for anyone under the age of 18 to possess a nicotine-containing device which e-cigs are typically filled with,” explains Oshkosh North Liaison Officer Ian Seaholm.

Despite the consequences, students boldly vape in school.

“These kids don’t care. They do it even when they see a teacher coming [in the hallway],” Haliburton said.

The production of e-cigs and juuls stems from cigarette companies, making the use by teenagers part of their success.

“I hope students understand the goal for companies with these products is to market them in a way to achieve their goal, so I would be cautious about claims that this is healthy to use at a young age because it could have lifelong consequences,” said Seaholm.

Some devices possessed by students can contain other substances—such as THC—besides nicotine.

“The best way to know the difference between CBD (cannibidiol) oil or a nicotine pod is to have it tested for THC levels at OPD. Any time a vaping device or paraphernalia is turned into student services,  we run it past Officer Seaholm. If a student appears under the influence and was found vaping, Officer Seaholm may then have that juice tested for THC,” Gauthier explains.

As the staff of Oshkosh North tries to stop the spread of this phenomenon, they hope all students are aware of the academic, legal, and health consequences someone may face by participating in this activity.