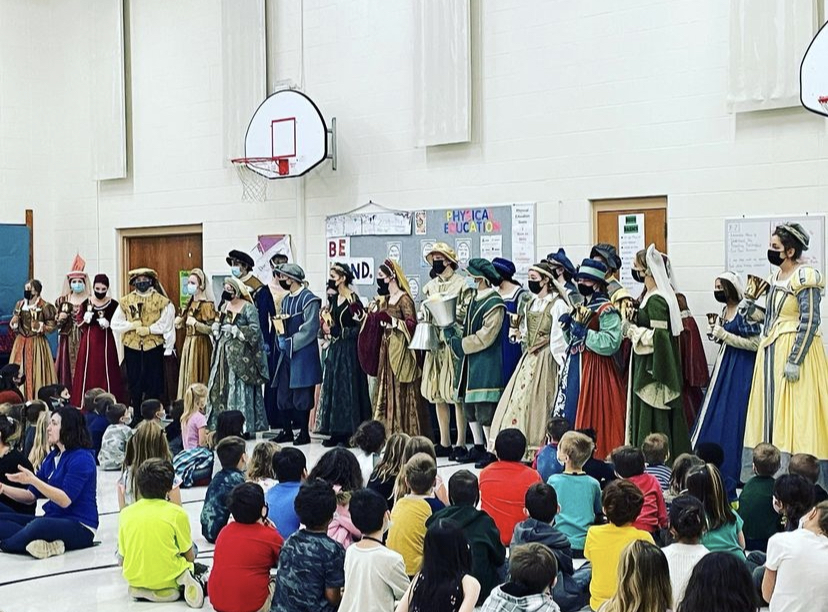 The Oshkosh North Madrigals singers are back in action within the Oshkosh Community after COVID-19 halted public performances for a year.

Performing for local nursing homes seems to have a great impact on both the elderly and the young singers.

“My favorite place to perform is probably nursing homes, because I love seeing their faces light up. They truly appreciate us because they get so much joy out of it, especially since some of them can’t leave or don’t have family left to celebrate with,” says senior Sebastian Javier.

Caitlyn Scott, a Life Enrichment Manager at Evergreen nursing home, spoke on the impact that the Madrigal singers have had on the residents at evergreen.

“Our residents absolutely love when the Madrigals are here. They always show up to support the students, and they truly love talking to all of them. The North Madrigals concert this year was the biggest crowd I have had in the Worship & Performing Arts Center in a long time.”

The final song in every set of the Madrigals repertoire is always Silent Night, during which all audience members are encouraged to sing along.

Senior Kayleigh Sievers cherishes the opportunity to perform publicly after being an alternate her sophomore year and having the season canceled due to COVID her junior year.  She especially loves bringing the ambiance of Silent Night into our community.

“It’s amazing to see how music brings everyone together and how despite differences and everything going on in the world, people can still enjoy music. Silent Night is one of those songs,” Sievers says. “The community members sing along with us, and seeing their reactions to the piece is so rewarding.”

The madrigals program has not only had a huge positive impact on the community, but on the singers themselves as well.

“I’ve made a lot of friends, and so many good high school memories,” says Emily Heider, a senior who’s been a madrigal for three years now. “I think because I was a part of it, my singing and overall confidence has improved.”

The Madrigals program at North has been a holiday tradition for decades—ever since the school opened in 1972. The many pieces of repertoire and club traditions, like singing for fellow customers in restaurants, have been passed down over the many years.

Originally, the Madrigals name comes from the genre of music. A madrigal is a type of nonsecular music sung a cappella, which gained extreme popularity in 16th century europe. This form of singing differs from the choral, often heard in church type, because of the fact that a Madrigal group had only one person singing on each part, whereas in many choirs, multiple people are singing on each part. Now, many Madrigals groups, like the one at North, have multiple singers on one voice part, but the use of blending and integrating one part into another allows for the pieces to exude the unified sound they always have.

After weeks of spreading cheer within our community, the Oshkosh North Madrigals will finish out their season Wednesday, Dec. 22, at the ONHS Collage Concerts for the entire student body.