Bolda to break the algorithm of his career 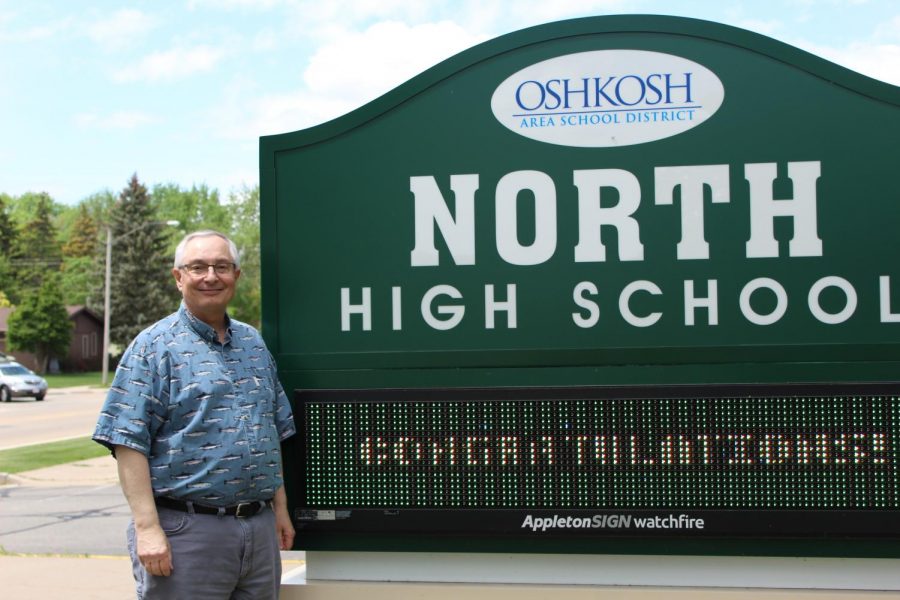 After a 27 year long career at Oshkosh North High School, math teacher Richard Bolda will retire at the end of this school year.

“I had a great career and appreciated all the people I have interacted with, students and staff, but I have mixed emotions walking away.”

Bolda started teaching in 1983 in Minnesota and began his Spartan career in 1994 bouncing between West and North for 14 years before settling as a Spartan. He did not enter college knowing he would teach, though.

“I was always good at math. I had great teachers and professors. I found myself always giving math help in college. I realized that was my calling. Teaching isn’t for everyone. It takes a servant’s heart. I learned to grow into that role.”

Junior Spencer Gassere shared his happiness with Bolda’s decision to become a teacher, knowing the talents Bolda holds could have gotten him a job in other professions.

“North will miss his sincere commitment to teaching and educating. He’s willing to help everyone, even students struggling with Algebra. He could do a lot of other things for more money, but he chose teaching,” Gassere said.

While at North, Bolda primarily taught upper-level classes such as Algebra 2 (Trigonometry), Precalculus, and Calculus. He also led the math team for many years. Through all of this, he built many memories.

“I liked his jokes and how he was able to make everyone laugh,” says senior Josephine Goetsch, who took Precalculus and Calculus with Bolda.

There are many projects and lessons that Bolda fondly remembers. In Precalculus, he would assign students a creative project to understand how math plays a role in everyday life.

“One project was an elliptical shaped mini-golf ‘course’ where you would place the ball at one focus of the ellipse and the hole was at the other focus.  No matter how you hit the ball it would go into the hole.”

Like all of us, he has stories he would rather never have happened. The embarrassing ones.

“I bent over and ripped the seam of my pants.  I left the room grabbing a stapler.  I fixed the seam with the stapler and later realized I better line the inside with tape!  I made it through the day, uncomfortably.”

Despite the hiccups that come with all professions, Bolda has overseen many comings and goings within North’s halls. Bolda acknowledges that education has changed over time. However, he sees one issue that keeps recurring.

“We need to keep developing better thinkers. Too much of education has developed into regurgitation or recall.”

In addition, the population of students at North has grown ever more diverse. Bolda sees that as a strength to the school.

“We value equity more than ever. We have always been a diverse student body – even more so now. That’s a good thing because we learn and work together to form respectful relationships.   We must continue to make this world a better place for all.”

While the diversity has grown, Bolda has noticed that students seem more stressed and impatient.

“Students seem much busier and stressed.  We could be more patient and less critical of one another.  We could also take more time to just listen to one another.”

Bolda would like students to practice more patience with others and with their own growth.

“Sometimes kids need immediate gratification, and some areas of education take time, and success is eventual. Eventually, you will succeed.”

As for staff members, Bolda wishes them the best but reminds them of the importance of the profession.

“Build a connection with students first and foremost. Students listen and learn better when their tail is wagging.  I learned that from my yellow lab, but it’s true in the classroom!”

Of course, the colleagues closest to him already know how much he has impacted the math department and the building as a whole.

“Mr. Bolda has impacted the whole math department by making us think outside of the box.   When we would meet during collaboration, he would have us take a simple idea or initiative and expand on it,” says fellow math teacher and department chair Keith Ruff.

Baetke says, “His depth of knowledge is unrivaled. It allows him to make connections where the curriculum fails.”

Teachers will undoubtedly miss Bolda’s experience, expertise, and wisdom; however, they will miss more than that, too.

“Our talks after school; his spontaneous puns that he always throws out at us; his wife’s apple pies on his birthday; his many thoughts and contributions to the math department,” says Ruff.

Jokes aside, Ruff appreciates how much Bolda has impacted him.

“I feel very lucky and fortunate to have worked with and known Mr. Bolda for over 20 years,” Ruff says.

In retirement, Bolda plans to visit family and friends often. He has four granddaughters with whom he will spend time doing his favorite hobby: fly fishing. He also will enjoy woodworking and would like to take a fall trip to Montana.