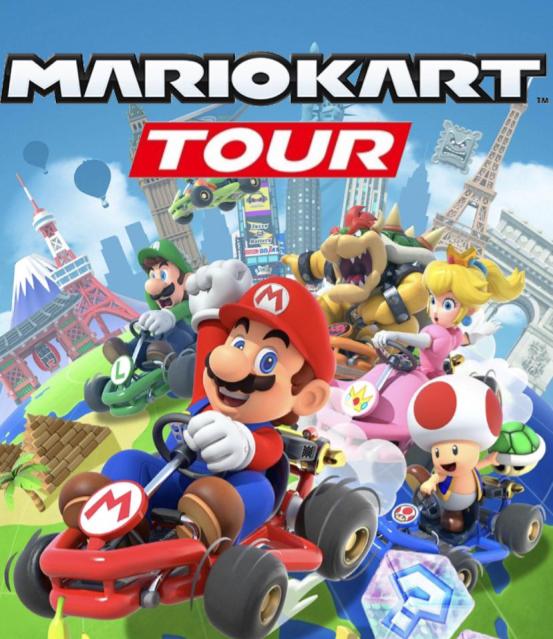 On September 25, 2019, Nintendo released its seventh mobile game, Mario Kart Tour. Although the game has a number of issues, it still provides fun gameplay and maintains Nintendo’s classic charm.

After Mario Kart Tour’s announcement in January 2018, fans highly anticipated this new app. However, fans were also worried about other flaws from Nintendo’s previous mobile games like in-app purchases, loot boxes, and simplistic gameplay carrying over.

Unfortunately, these issues have indeed carried over and do affect the quality of the game.

The gameplay, for one, although it was very fun at first, is very uninvolved and quite easy, even at its fastest free mode (150cc), especially with the game’s default Smart Steering that helps players keep their karts on the track. This is partially due to the fact that Mario Kart Tour was made exclusively for mobile devices using a touch screen, only capable of simple inputs.

The controls can be cumbersome, especially the steering, as the game only provides two options for controlling the kart. The player can choose either automatic or manual drifting, both of which take away control. With automatic drifting, the player cannot choose when to drift while turning, and, with manual drifting, the player must always drift. Although these controls are awkward, they can be learned with practice.

The game also has a very strange way of scoring races. While most racing games determine the skill of players by the place they take (1st, 2nd, 3rd, etc.), Mario Kart Tour instead evaluates racers based on points, many of which are acquired before the race even starts and are based upon what character, kart, and glider are being used.

As a result, a player does not necessarily need to win the race to get a perfect score of 5 stars, and, in other races, the player may finish in first without 5 stars, rendering final placement virtually useless.

Additionally, certain combinations of characters, karts, and gliders give distinct advantages. For example, certain characters can collect one, two, or three items per item box, and some karts or gliders provide various power-ups or increase the likelihood of getting specific items. Although this doesn’t usually affect the score by the end of the race, it does make the game a little less fun.

What’s worse is that the components required to race (racers, karts, and gliders) are awarded randomly by either appearing as some of the daily sales in the shop that can be purchased with coins (in-game currency) or from “the pipe,” a loot box that requires the player to spend rubies (more in-game currency) to afford to launch an item out.

Since acquiring coins or rubies in the game takes a long time and requires players to frequently open the app, the only ways to effectively win good items are to get lucky, purchase the currency for real money, or get the “Gold Pass,” a $4.99 monthly subscription ($60 a year: $40 dollars more than Nintendo’s yearly online subscription for the Switch) that gives players more rewards and unlocks 200cc (the game’s fastest mode).

In the end, the game judges races on either how much money a player spends or how lucky they are—not the player’s talent.

Despite these issues, 129.3 million people downloaded Mario Kart Tour within its first thirty days of release, the second-best in the history of mobile titles (only behind Pokemon Go). Although the media’s extensive coverage of Mario Kart Tour has likely affected its popularity, it has also achieved this number of downloads because the game is legitimately fun.

As far as mobile games go, Mario Kart Tour is an enjoyable, high-quality app. After getting past the somewhat awkward controls, peculiar scoring system, and various limitations within the game, it still can be fun to play when there’s not much going on or for a little break.

As long as players don’t expect this app to be the kind of game to progress and build skills in, they shouldn’t be disappointed. As a Mario Kart game, Mario Kart Tour is hardly comparable, but as an app, it’s a great, casual game, perfect for a quick race every now and then.