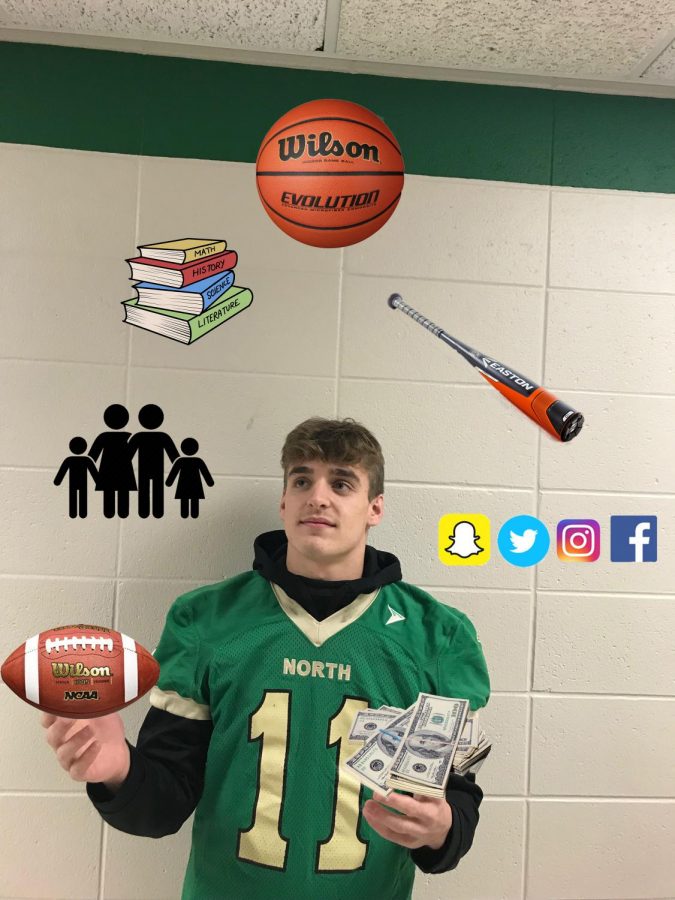 Student-athletes juggle many responsibilities, which often forces them to make difficult choices with how they spend their time.

The pressure that comes along with being a high school athlete often goes unrecognized. Long off-season days, balancing school and athletics or late night games, it takes dedication to be a successful athlete and student.

Many students often find difficulty choosing their athletic path after youth sports come to an end and as they head into their high school careers. Often students want to participate in multiple sports to continue their passion, camaraderie, and competitiveness. Others find focusing on one sport provides more focused development while allowing them more time for other things.

Many pressures and influences can come along with the decision, such as the athletes’ athletic goals, whether they have or want a job, what sports they already play, family, and coaches. Each athlete experiences a different situation with different priorities. An athlete with dreams of playing in college or professionally will typically have a different approach in their athletic path than an athlete who plans to cut their career off after high school. Time commitments to jobs and other activities can also affect how many sports an athlete participates in.

Many multiple sport athletes can find trouble in balancing sports, school, social lives, and jobs. They have to be good at time management skills and being a part of multiple environments. These athletes are also usually more durable due to the larger variety of muscles that are being exercised compared to the single-sport athlete.

According to a study done on NBA players by the National Scouting Report, researchers found that the majority of athletes that played more than one sport in high school were significantly less likely to sustain a major injury. Playing multiple sports can also help an athlete avoid the “burnout factor”, which is when an athlete starts to lose interest in their sport, or develop injuries due to working the same muscle groups too often.

Spanbauer feels that working different muscle groups and training different skills makes him an overall better athlete in every sport he competes in.

Besides helping avoid injuries and burning out on a sport, playing multiple sports can help athletes learn soft skills too.

“The benefits of multiple sports is that the athlete learns time management, embraces a good work ethic, and has a chance to learn and work with multiple styles and philosophies.”

If an athlete does have a main sport, they could possibly risk injury and have to sit out part of their main sport season. Playing multiple sports can also lead to taking time away from skill work and off-season gain compared to their one-sport athlete teammates who are making larger improvements year-round.

Coach Weber believes that multiple sport athletes do have time to make increases in their game during the off-season period; it is just a matter of how committed an athlete is to improve.

“We have had some real good ones, Nate Neveau and Taylor Cameron, who have played multiple sports. What made them good was that they continued to find time to develop and refine their basketball craft. It doesn’t take a ton of time to do that, while playing another sport, finding 15-30 minutes in the day to squeeze something in. “

“For me, I’ve loved the game as long as I can remember. It never felt like a job to get up for early morning shootings, afternoon liftings, open gyms or the countless hours I spent in the gym with my dad. All of it felt necessary to achieve my goals and at no point did I ever stop loving the game.”

One advantage that Coach Weber sees in athletes playing one sport is the time devotion to getting better and the connections they can continue to build with teammates year-round.

“The benefits of a single sport is that there is more time to devote to skill development, misses out on less time with the team (due to conflicts with multiple sports), and is not caught between a rock and a hard place trying to please multiple coaches.”

The one-sport athlete can also appreciate the extra time they have for other things besides athletics, which can be a negative for some multiple sport athletes.

In the end, both sides have their pros and cons. There are no cookie-cutter answers to what a student athlete should do. Making the decision to continue or discontinue sports heading into high school is a big decision, and every factor should be taken into consideration.

The athlete’s passion level, plans after high school, and the pros and cons of every decision are all things that affect his or her choice.