Where Will Zion Land? 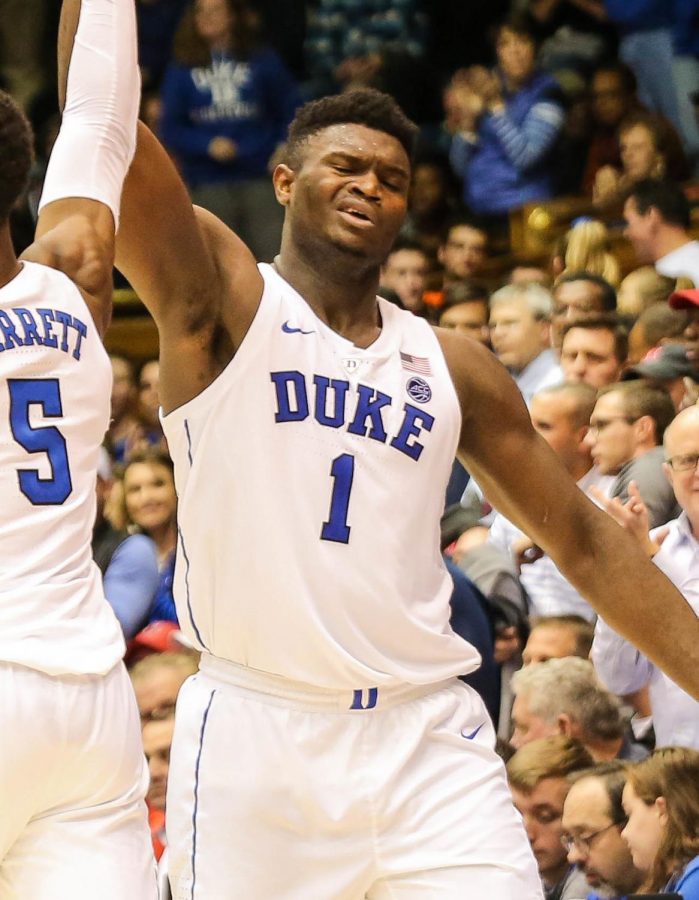 Duke standout Zion Williamson is a guaranteed lottery pick in next summer’s NBA draft, as many NBA organizations are fascinated by his extreme athleticism and basketball IQ, but what would be Williamsons’ best destination for his rookie season in the NBA?  With around 30 regular season games left in the 2018-2019 season, the top three lottery picks are starting to shape themselves out, which are most likely going to be occupied by either the New York Knicks, Phoenix Suns, Chicago Bulls, or Cleveland Cavaliers.

Ever since Carmelo Anthony’s departure from New York in 2017, winning has been a thing of the past. The Knicks were 29-53 in the 2017-2018 season, with a talented 7’3 forward Kristaps Porzingis, but this season things are quite different. Currently the Knicks stand at last place in the eastern conference with a record of 10-43. Also a recent trade this February sent former all-star Porzingis to the Dallas Mavericks along with Trey Burke, Courtney Lee, and Tim Hardaway Jr. In return, the Knicks received former North Carolina State guard Dennis Smith Jr, former all-star DeAndre Jordan, and guard Wesley Matthews. Trading away a franchise centerpiece in Kristaps Porzingis is a clear indication that rebuild is taking place, and the Knicks are ready to test free agency next summer. DeAndre Jordan and Wesley Matthews both have expiring contracts after this season, so there will be plenty of cap space to secure a big name superstar. If the Knicks keep up how they have been playing all season, they will most likely secure the 1st overall pick this summer. If the Knicks were to draft Williamson and secure a big name superstar this summer, they could have potential to make the playoffs next season. Williamson could be put in a tough spot though, being drafted and then immediately feeling the pressure to win next to a big name like Kyrie Irving or Kevin Durant. I think that the Knicks will end up securing a big name this summer, because of the young talent on the Knicks roster, and the fact that New York and the Madison Square Garden is such an amazing place to spend your NBA career. If Williamson ends up in New York, he will have a chance to be a part of a successful team early in his career, but could also be put under pressure to develop fairly quickly, which could lead to failure.

After Lebron James departure from the Cavaliers last season, the Cavaliers have had a pathetic first half of the season, with a record of 11-41. As of right now, the basketball fans in Cleveland do not have much to be excited about, except for the fact that they could potentially secure a future superstar in the upcoming draft. The Cavaliers roster is filled with veteran role players, and a few young hopefuls in Colin Sexton, Jordan Clarkson, and recently acquired John Henson. Looking at the way Williamson likes to play, very explosive and likes to attack the rim, this may not be the roster for him. If this organization is looking to draft Zion and make him the centerpiece of their offense, they need to acquire some shooters to catch and shoot off of his penetration. As of right now, the Cavaliers aren’t shaping out to be a successful team in the next few years, with or without him. This organization would benefit from drafting Williamson, and completely transforming their team around him, and Williamson wouldn’t also feel the pressure to win right away

The Chicago Bulls have not been a very successful team in the last couple years and haven’t changed their losing ways this season either, standing at 13th in the eastern conference at 12-40. The Chicago Bulls could possibly have a future NBA superstar in Zach Lavine, who is averaging 22.9 points per game and 4.2 assists per game this season. They also have a few successful young players in Lauri Markkanen, Wendell Carter Jr, Bobby Portis and Jabari Parker. Williamson’s fit in this roster might be superfluous, though, due to the talent in forwards already with Markkanen and Parker. If the Bulls would decide to draft Zion, it wouldn’t be a surprise if they decided to make a trade with one of their young forwards to acquire some more guard talent, but the Bulls could also draft exceptional guard talent in Murray State’s Ja Morant,  Duke University’s Cam Reddish, RJ Barrett, or even Indiana University’s Romeo Langford. The Bulls have potential to be a successful team in the near future, but unless they make moves to make Williamson a big part of their rotation, they don’t shape out to be the team for him. Chicago’s recent struggles obviously indicates a rebuild is taking place right now, but will they stick with the young talented forwards they have now, or will they take the risk of drafting Williamson and trading for guard talent? Seeing where this teams young talent is taking them now, (13th in the eastern conference) maybe drafting Williamson and taking the risk of building around him isn’t such a bad idea.

The next team with a potential to pick Zion in this summer’s draft is the Phoenix Suns. With the All-Star break approaching, the Suns are sitting at 11-42, but could possibly have a brighter future than any other struggling team in the NBA. The Suns roster consists of many young talents, including former Washington Wizard Kelly Oubre, Josh Jackson, 2018 #1 overall pick DeAndre Ayton, Dragan Bender, and lastly the centerpiece of the organization Devin Booker. Booker, who is averaging 24.8 points per game and 6.7 assists per game, along with Williamson, who is averaging 22 points per game and 9.2 rebounds per game, could just be the NBA’s next best offensive duo. Booker’s ability to score in any way he wants and Williamsons explosiveness and ability to finish around the rim could be quite the show to watch, especially if the Sun’s organization can make moves to acquire solid role players to surround the two young stars. Although, Phoenix is showing that they are the most talented team out of these three struggling organizations, which means they are most likely to not receive the 1st overall pick behind the Bulls and Cavaliers. Possibly trading up in the draft to get the 1st overall pick would not be the best option for this team, doing so could possibly jeopardize the teams young core, knowing that whatever team secures the pick will not be asking for a cheap price.

As of right now, the city of Phoenix would be the best opportunity for Zion Williamson and his early success.